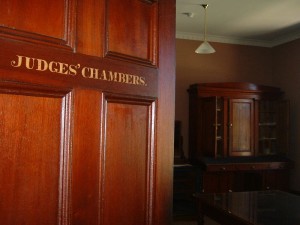 At Herron’s readiness hearing, all the parties, including Herron, discussed how to question the jury about sensitive information regarding their experience with sex crimes.  The court explained to Herron that questioning the jury in open court may cause some jurors to be untruthful, but it was his right to do so.  The court gave Herron some alternative options that included privately questioning jurors in chambers or individually questioning them in open court without the rest of the venire present.  At the pretrial hearing a week later, Herron chose to question jurors in chambers and waived his right to open court.  The jury convicted Herron and on appeal he argued the public’s right to open trial was violated.

The court of appeals recognized there might be a situation where §10 may be asserted by a criminal defendant, such as when sealing or unsealing documents.  But, a criminal defendant cannot assert the public’s right as a redundant basis for their personal right already waived.  Both §10 and §22 guarantee the same right, and a waiver of one is a waiver of the other.

In addition, Herron did not satisfy the requirements of standing.  Powers v. Ohio, 499 U.S. 400, 411, 111 S. Ct.  1364,  (1991) allows a third party to assert a right on behalf of the actual litigant only if the third party suffers from an actual injury and is in close relation to the litigant and the actual litigant is hindered from asserting it himself.

Herron did not claim any injury in fact by the courtroom closure that he himself caused.  He made no showing that he had a close relationship with the public or any particular people who may have been present and there is no evidence the public was prevented from asserting its own rights.  In fact, they have done so in the past.  See Reyes, slip op. at 18-20,22-23.

Even though the court did not articulate the Bone-Club factors during the conversations, it did discuss them all but one.  It failed to give the public an opportunity to address the proposed closure.  But, the existence of an error itself does not confer third party standing.

In conclusion, if your client waives his right to open court, he cannot assert the public’s right on appeal unless he can meet the standing requirements and it is not simply a redundant basis for his personal right.